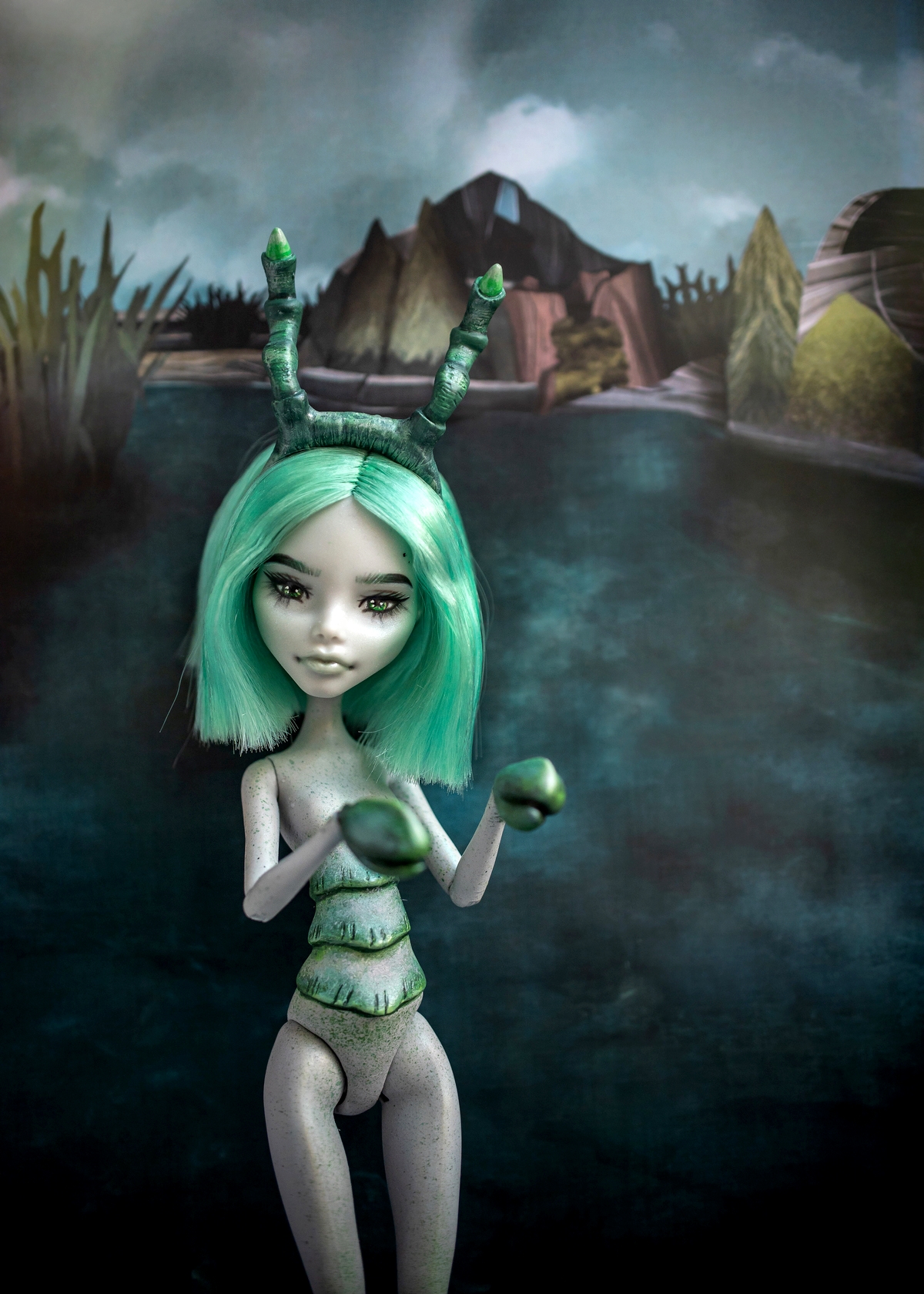 I was working with some fellow doll customizers on a collaboration called "Sexy Video Games Characters". We all choose one non-human character from a game and because I mostly play League of Legends, I picked a character from this game.

I started the customization by choosing the base model, which was Ghoulia Yelps from Monster High. Then I removed the head, and also the hair to prepare the doll for the reroot. I used two green shades of nylon hair to reroot the head.

For the body modifications, I used epoxy clay (this time Milliput). This was the longest part of the customization because after every little modification I had to wait 12-24 hours for the epoxy to cure, then I needed to sand the surface to see my mistakes, then add a little more epoxy, then waiting 12-24 hours again and so on... until I finished the sculpting part. After I modified the body and the hands, I used a spray primer to uniform the color of the body.
To paint the body and the hands, I used gouache colors which I fixed with a clear spray sealant.
To create the antlers I used a headband as a base, so it is removable.

For the new faceup, I used acetone to remove the factory paint, then I used artist-quality pastels and watercolor paint to make the new face. I used UV-cut spray sealant to protect the base doll, and also to seal and protect my work.

Rift Scuttler will arrive nude, but she will bring her antlers, and also the necklace from my photos.

~ Colors may be different in real life due to different computer monitors.
~ Her new style is 100% handmade, so she is not factory-perfect.
~ She is a piece of art and not a toy! She is not meant for children to play with. 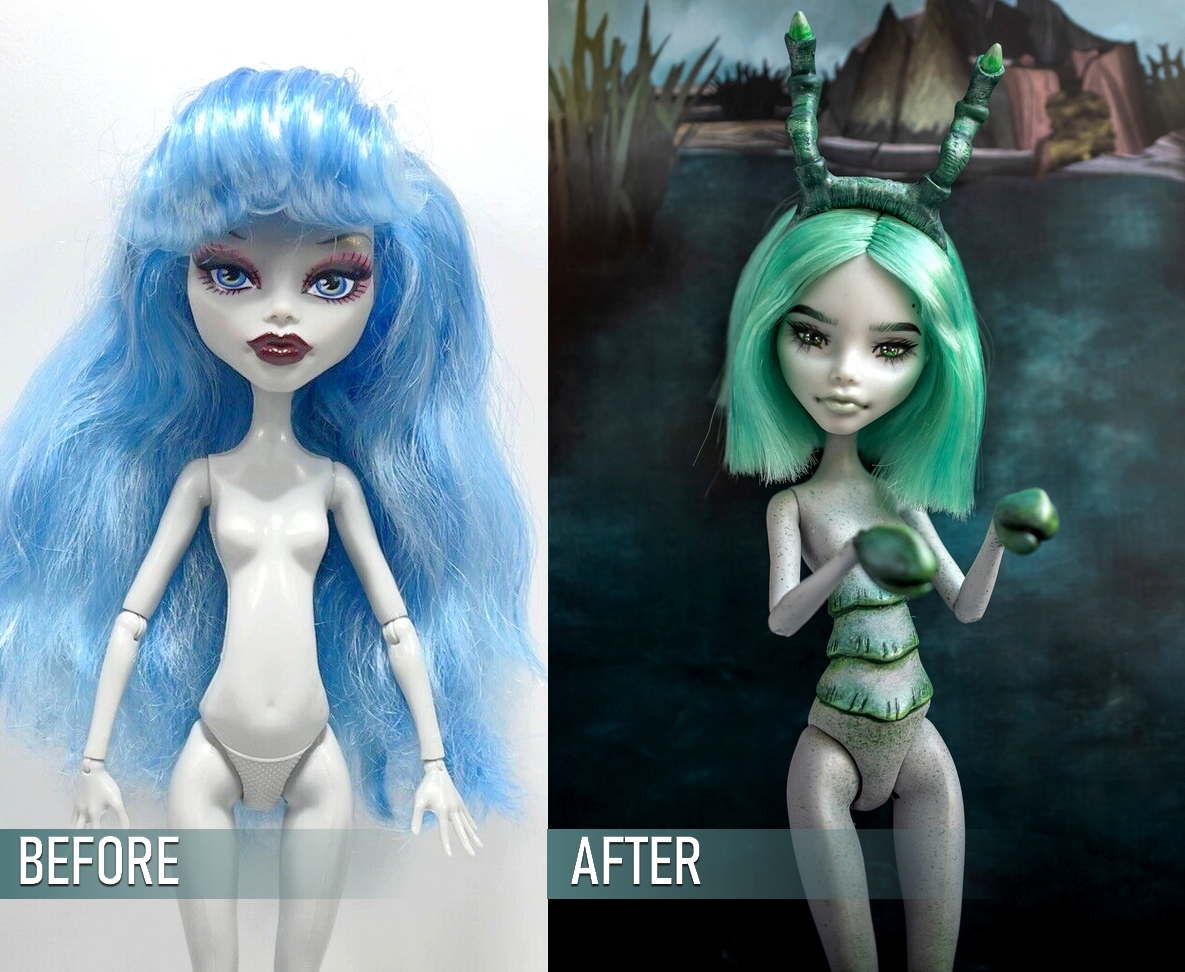 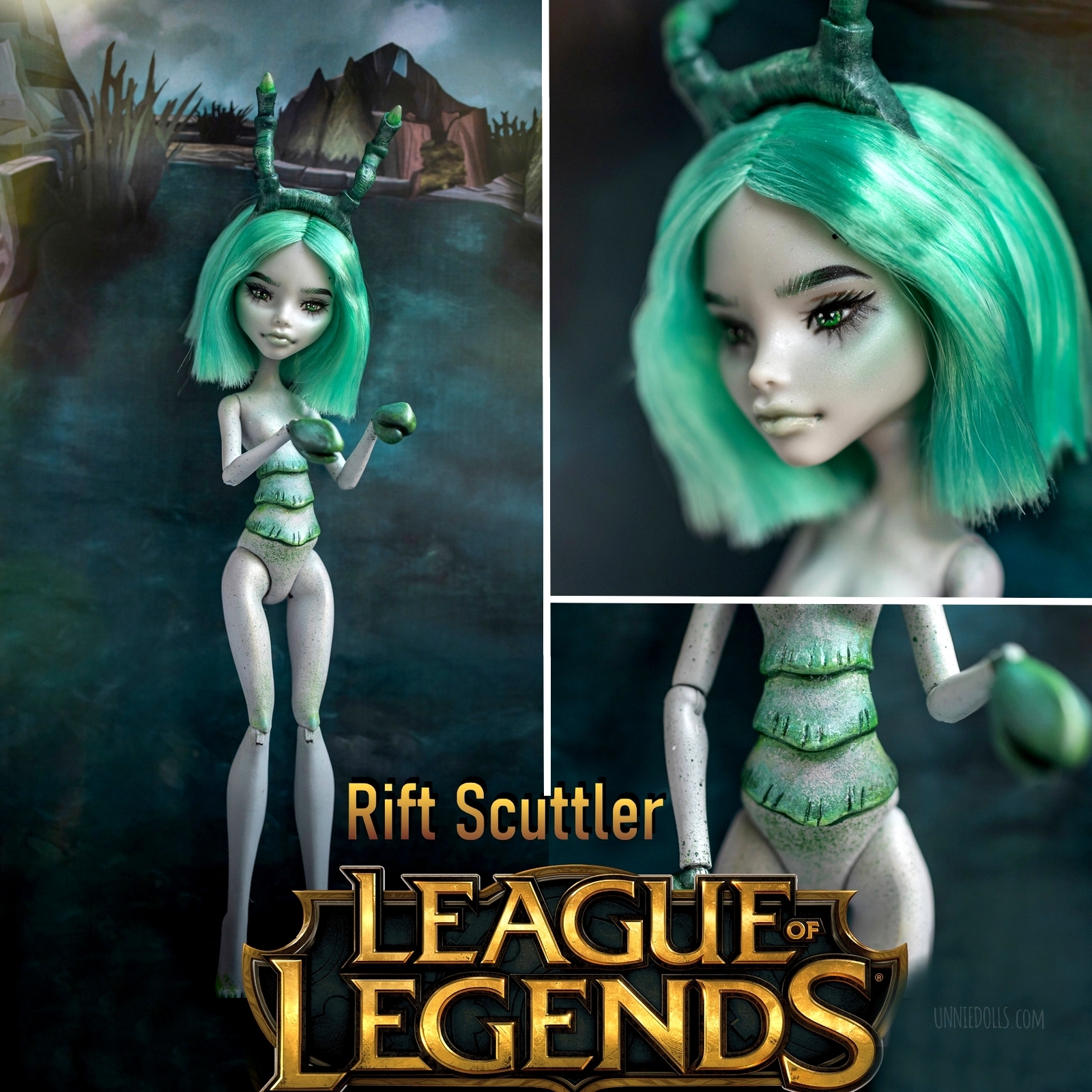 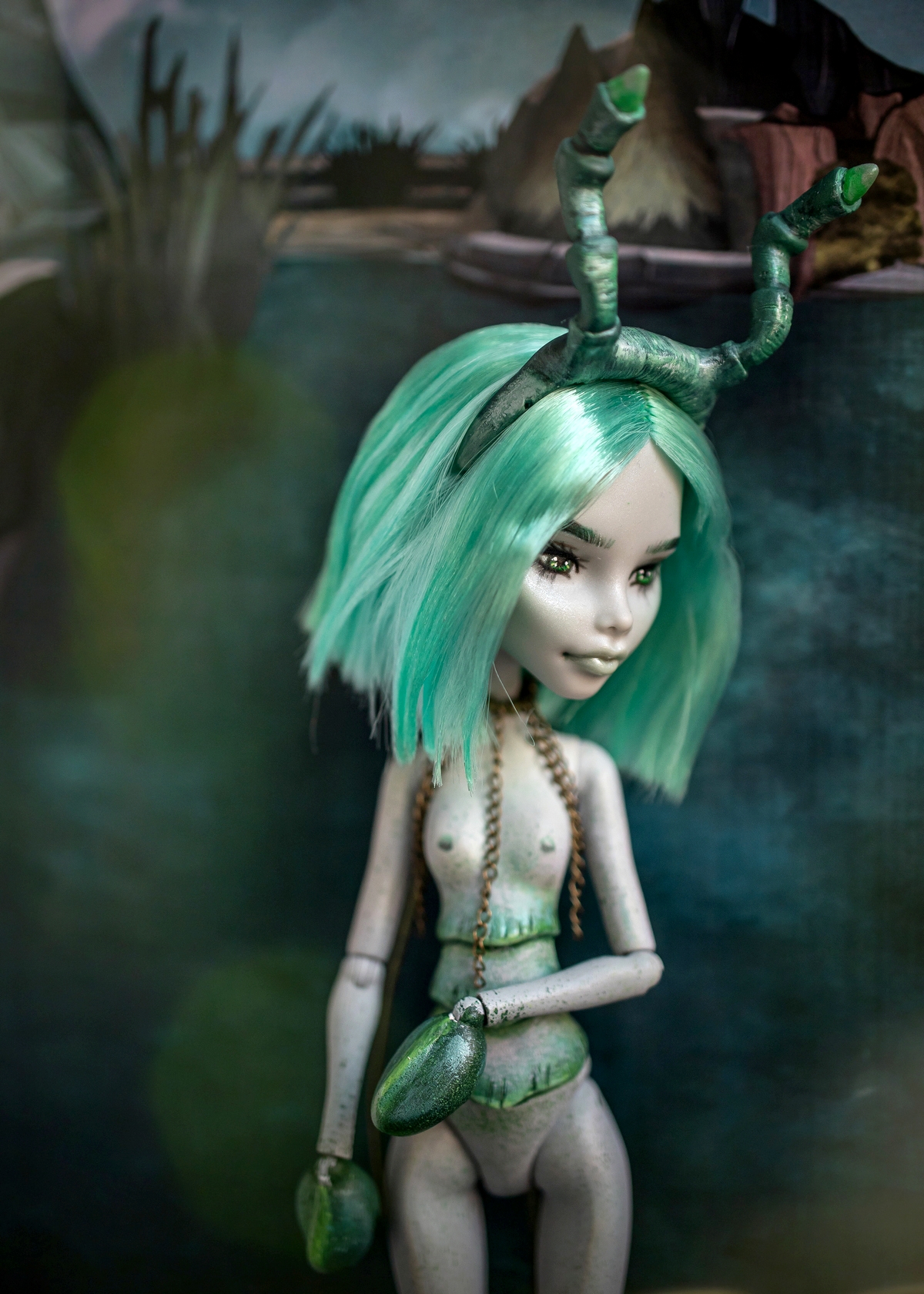 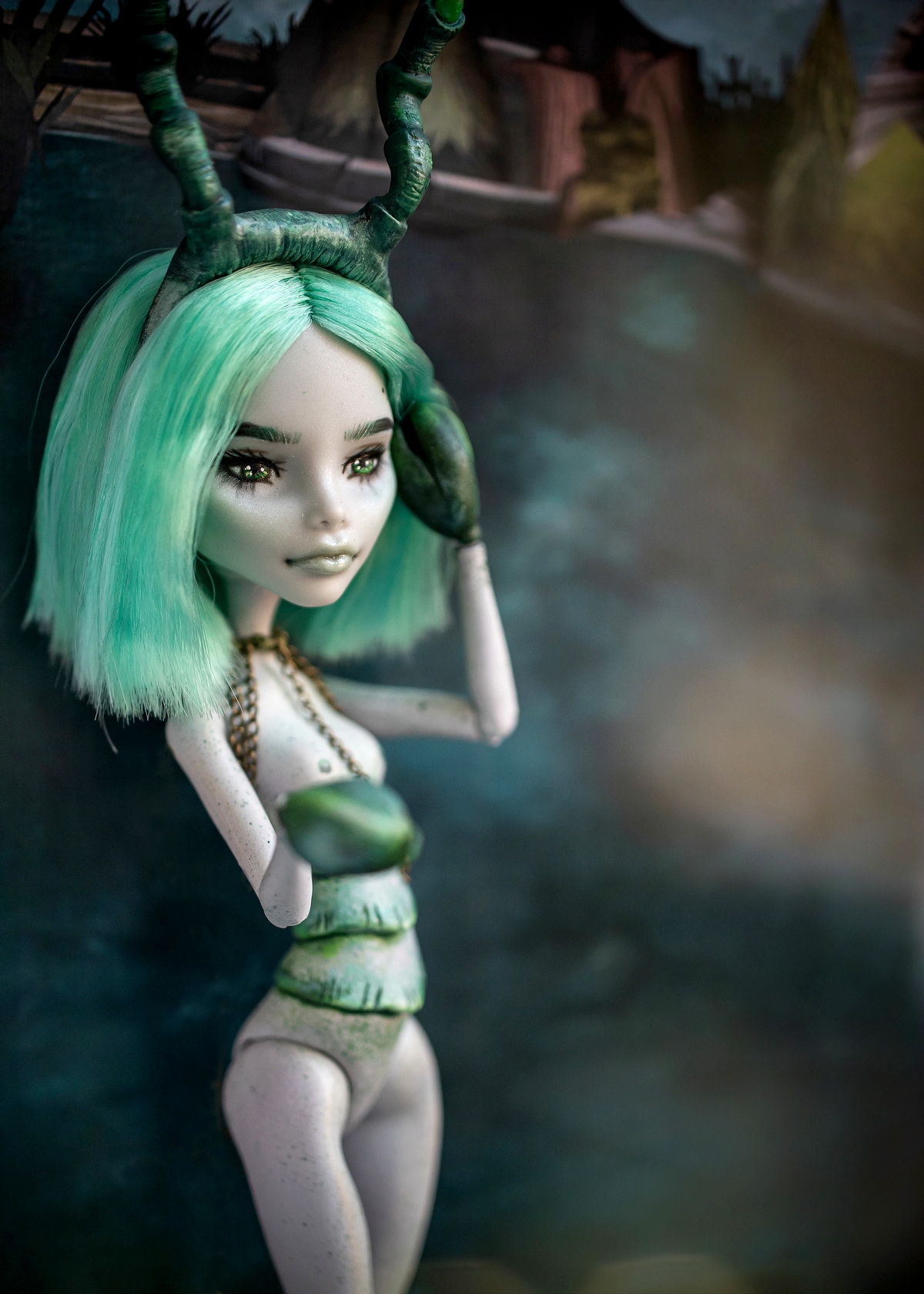 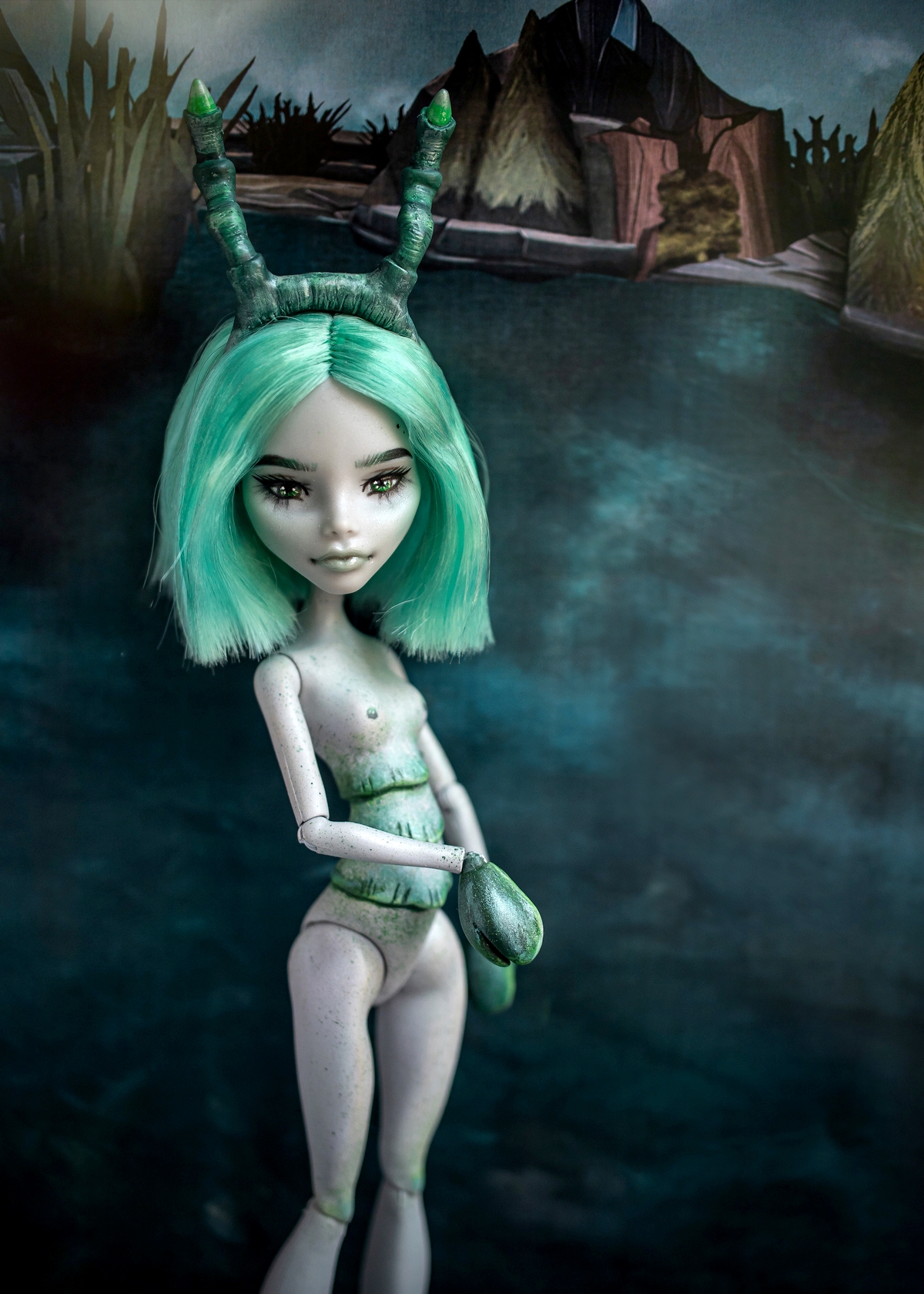 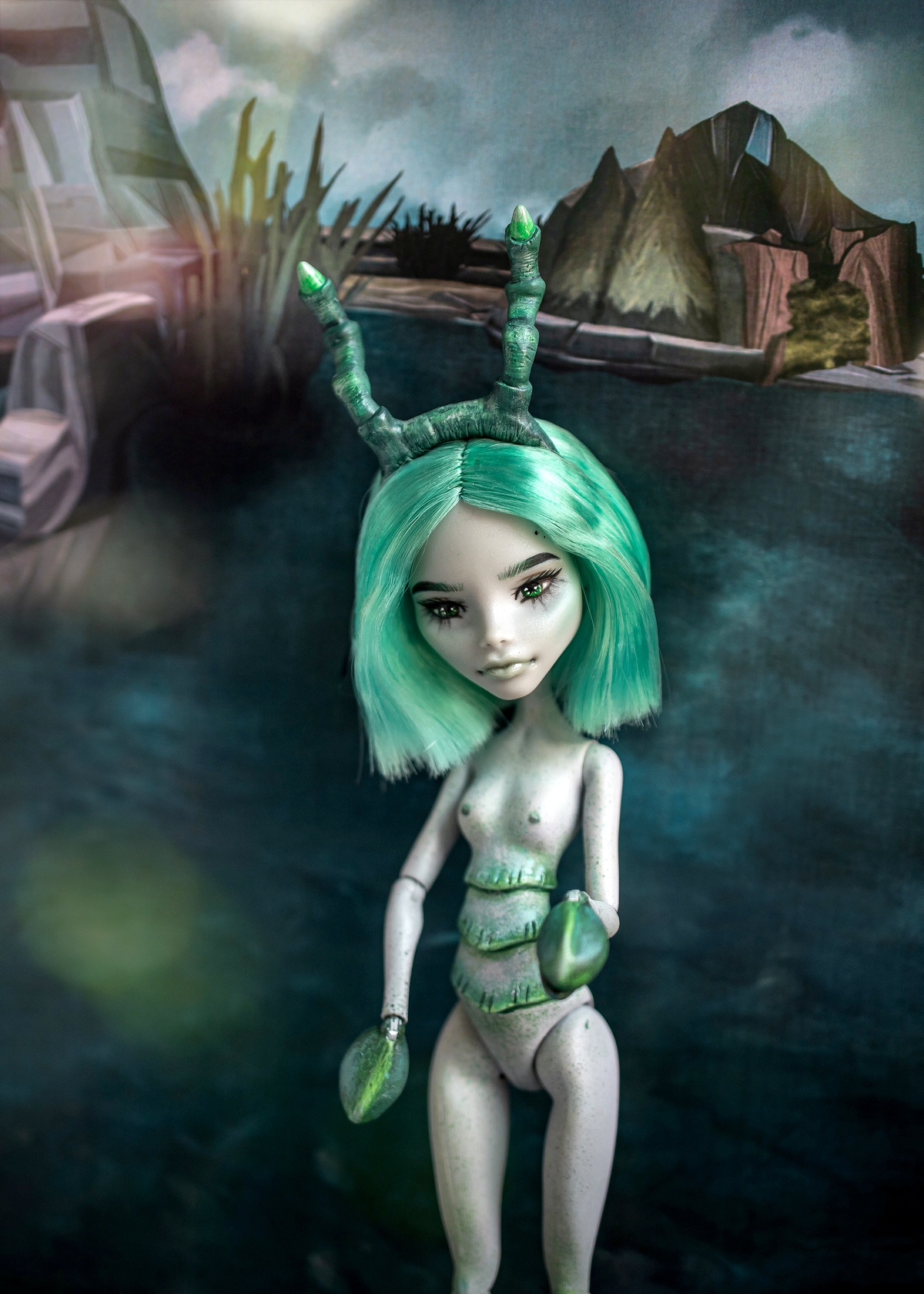 How can I adopt a doll?

To adopt a doll, registration is not necessary on my website (unniedolls.com), but you have to have a PayPal account. You can pay from your PayPal balance or you can use a credit card. Click on the "Buy now" button to start the adoption procedure.

Can I get a discount?

You can get huge discounts by adopting at least 2 of my dolls at the same time. I'm offering discounts to my returning customers too (like free shipping).

You can also get a 10% discount every month if you are a Golden Insider supporter on my Patreon page.

Do you accept layaway?

I usually accept short layaway. You have to pay half of the total price at the time of the purchase and the other half + shipping within 30 days.

If you need longer layaway (+30 days so 60 days in total), the minimum deposit is €100. The paid deposits are non-refundable under any circumference and by paying the deposit you automatically accept this and agree with it!

- All dolls are shipped from Romania (EU), using Romania Post for €17 (tracked)
- I am not responsible for packages that are lost, stolen, or delayed.
- All sales are final: once an item has been shipped, there are NO exchanges or refunds.

- Delivery time in the EU is usually 2-3 weeks.
- If you live in the US, please note that the delivery time can be 7-9-12 weeks.
The packages leave my country within 1 week, but they move to a shipping container. The tracking code will show that the package left my country, but can’t be updated because in a container the barcode can’t be scanned to update. When it arrives at the destination the container will be unloaded and the pieces will get scanned, then delivered, probably on the same day.

🔴❗ By paying for a doll you automatically accept my policies and agree with them. ❗🔴

If you see my photos you will know what kind of dolls I make. If you have an idea, please write me and we will create your dream doll 🙂 I will have a lot questions for you because YOU have to be satisfied at the end. I have to know everything about your dream doll.
I can make unique and the most beautiful dolls in my style. I never copy other artists’ dolls, so please never ask this. I never copy my dolls too! Of course, these dolls may be inspiring, but I want to create unique dolls… They are worth being unique.